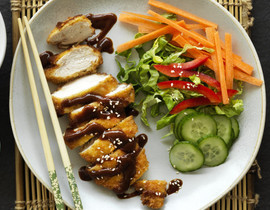 Most pantries will have a bottle of Lea&Perrins Worcestershire Sauce and mine is no exception. I often add a dash to casseroles, pour it over grilled meats and of course tomato juice always needs a generous dash of Lea&Perrins.

The sauce originated in India and as the story goes, it was brought by Lord Sandys to England in the 1830s. He then gave it to two chemists, John Lea and William Perrins who lived in the town of Worcester, and asked them to recreate the recipe. The sauce they produced was initially rejected as unpalatable so the jars were stored and forgotten about.

A few years later the jars were rediscovered and the flavour had greatly improved with age! In 1837 the Lea & Perrins Worcestershire Sauce we know and love today was commercially produced.

The key ingredients used in the sauce remain the same and include anchovies, tamarind and molasses. The sauce is traditionally fermented in wooden casks for 18 months before being bottled. The bottles still come wrapped in paper as the original ones were – Unwrap the Possibilities!